In RL I live not far from a ranch. And every year, right around my birthday in late February, there are newborn calves. Our second year here, my husband mistakenly called them “mooborns” as a joke, and I squealed in delight. Now “mooborn” season is highly anticipated by all. Or at least by me, and possibly by the pregnant cows and the ranch owners. Not so sure my husband highly anticipates the squealing of “MOOBORNS” every time we pass, along with delighted shrieks of “ohmygawd they are SO TINY!” What can I say, I’m a child at heart. Besides, this thing with cows began with my father. My father was a man of many faults, but one of the more endearing (and yeah, okay sometimes frustrating) qualities he had was this childlike joy of life, this ability to be so silly and make us laugh. When we were little kids, he’d take us to The Land Of Make Believe in Hope, New Jersey. Hope is in a part of New Jersey few people realize exists. It’s beautiful, as rural as you get in a state that small and with that many people, and it’s full of farmland (or was, I imagine there’s been some build up). It’s near the Delaware River, and it will always remain a very special place in my heart. But as you might imagine, there are some cows in that area. And when we drove by them with our dad, he’d cry out “MOOOOOOOOOO!” It became a thing. So as silly as my “mooborns” thing might be, or as silly as it may be when we drive by at Christmas and I say “Moory Christmas, cows,” it also makes me happy. It’s like some sort of weird tribute to my dad, a way to remember happier times with him, and I know he’d approve and probably join in, if he were here to do so.

So, as you might imagine, when Dysfunctional Designs recently released cows, I was delighted. See? I told you it would all come together. I already have the Dysfunctional Designs chickens (their clucking sometimes might make my poor husband crazy), with their adorable (and texture change) hen house. And I recently built a pen for my Half-Deer Kerfluffle collection (or at least some of them). So of course, I needed a pasture for my cows. Which, by the way, MOO! They actually moo (both the cow moos and chicken clucks can be turned off, btw). They also swish their tails, and lower their heads, as if to graze. They’re texture change with a bunch of color options, including a couple not seen below. Oh, and there is a static, non-mooing version with built in animations. So if you’ve ever wanted to sit on, sleep on or hang out on a cow, here’s your chance. I’m sitting on Ethel below. The official name given by Dysfunctional is Bessie, btw. But of course, they can’t ALL be called Bessie! I am obsessed with naming things, and so is my sister Isley. So I named the white cow Bella, the grey cow Tess. Isley named the rest. Ethel is the one I am sitting on, Martha is the solid black one, the red and white one is Beverly and Bessie is the black and white one. I know you really wanted to know all of that. Just be glad I didn’t share the chickens’ names. And yes, they have them.

Okay, enough about cows. Let’s talk about my outfit next. I’m wearing a new(ish) release from coldLogic. This was their first release designed to be mesh body friendly. I’m not wearing it with the mesh body here, but it did work nicely with my Maitreya and SLink bodies. I’m also wearing one of the releases from the newly opened FATEstep, the Ziggy chucks. Finding cute sneakers in SL is such a challenge, and these are awesome! The FATEstep shoes have so many color options via the HUD, and these include versions for system feet, so if you’re not into mesh bodies or body parts, and have been frustrated trying to find shoes, check out what FATEstep has to offer. Not all of their shoes include system feet versions, but some do!

My skin is Izzie’s latest full release, Romy. This lovely skin was released at Skin Fair, but is now available at Izzie’s Mainstore. I look so sweet and innocent, and no matter what anyone might tell you, it’s not a lie. 😀 Again I am wearing Truth’s new Flynn hair. I know I just blogged this, and I pretty much never repeat something that fast (if at all), but I am really in love with this hair. After hanging out with the cows, I needed a break, so I took shelter in my floorplan sleepover tent. 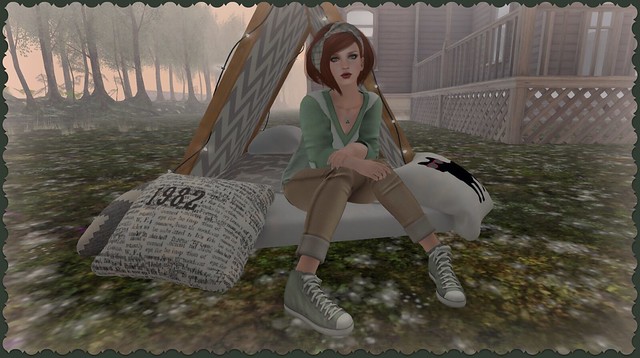 If you’d like to party until the cows come home, or better yet, party with some cows, go get your bovine fix at The Fantasy Collective. The pack of cows is just L$145 which is an amazing deal for how detailed they are and with the texture options.