Since my 2nd week in SL, I have been a redhead. I’ve done a handful of blog posts (often fantasy ones) where I used a different color, but even then I usually went for one with red highlights, if possible. But for some reason I found myself recently compelled to try something new. I decided that pastels would be pretty on this soft skin, with these lovely violet/rainbow eyes from Buzzeri (which are at The Epiphany). This is kind of a big deal for me, because I’m pretty sure that somewhere I’ve said – at least once – that Lucie would always be a redhead. And odds are, I’ll go back to red soon. But I want to experiment a bit first, I think.

In yesterday’s post, I mentioned that I would show you a closeup of Glam Affair’s pretty Hanna applier from Memento Mori. The important thing to know is that while there are a couple of pretty, more natural options on this skin, it also comes in versions with blood! Because Memento Mori, of course, is an event that has a macabre vibe. I do, however, appreciate that Aida Ewing did a couple of versions that were softer. The tone is Polar (which just so you know is NOT built into the Maitreya hud – I had to go get the appliers for it at the Mainstore. It’s also not built into the hud for Vista’s bento hands, so I have the Maitreya hands on here), which is so pale it’s kind of fantasy in and of itself, but this super soft makeup made it look so wintry and I fell in love with it. My hair is a recent Mainstore release from Truth, and my adorable Love Birds necklace is by Cae. It has two little leaves you can customize with initials of your choice (or you can hide one or both). Mine has an L and an R (for “Radagast,” my husband’s SL name). My lashes are Izzie’s for LeLutka, and I love all the different styles you get. 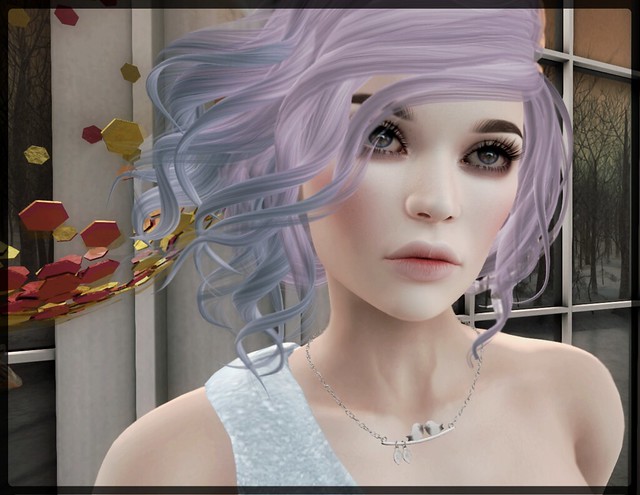 I also have to share the amazing Aurora dress that Annie Melson of Just Because released at Uber. The story behind this design is utterly adorable. Annie’s teenage daughter drew this design! So she made the dress in SL, and she’s paying her daughter for her work. Also, they plan to do more together! It’s just the loveliest story of encouraging her daughter’s dreams and being an awesome mom. I completely adore this. I have said it many times, but Annie is one of the kindest, most genuine people I’ve met in SL. And she’s so talented, a trait she and her daughter clearly share!

My shoes are Grace from Gos. If you missed it, he recently updated a bunch of his older shoes to be compatible with Maitreya and SLink bodies. I’ve always loved his work, so this made me super happy! 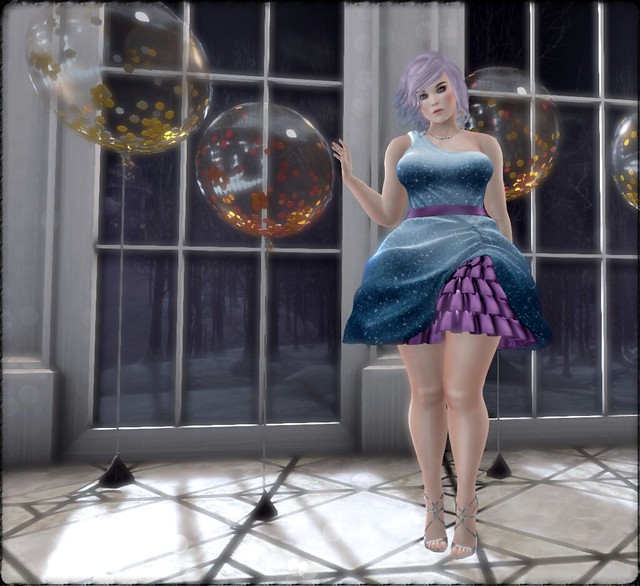 One thought on “Pastel Winter”