When I saw Decoy’s mermaid gacha for Lootbox, I was really excited. I mean, who doesn’t want to be a mermaid? This gacha has it all, including body jewels, a crown in multiple colors and a trident (neither featured here). There are gorgeous pastel color options that are more typically associated with mermaids, but I found myself surprisingly drawn to the black tail and shell bra. I decided to create an underwater scene that was like a lake, instead of the more expected ocean. Maybe it’s from reading Harry Potter so many times! 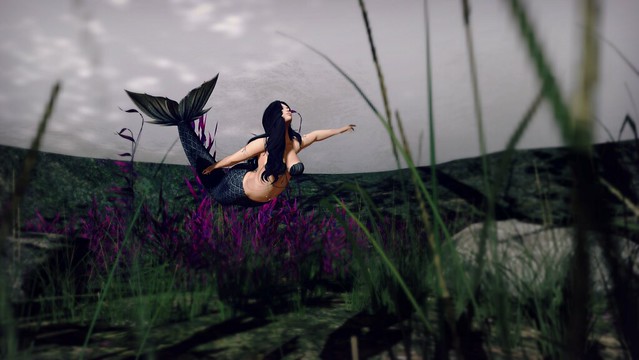 I’m wearing League’s recent LeLutka applier release (it was at Skin Fair, so if it’s not in the Mainstore yet, I imagine it will be soon). I really liked this applier, particularly because you get eyeshadow options ON the applier, meaning you can add eyeliner (it even comes with several eyeliner styles) or other shadow on the eyeshadow layer. That’s something I haven’t seen before, so I was pretty excited by that.
My hair is Truth’s current Uber release – Cheri – and it has two versions. One goes over both shoulders, but I opted for the version that only goes over one. I’m still having fun playing with different hair colors, as you can see! My eyes are Izzie’s recent Tokyo Lights version. The original darker ones and the Lights are both gorgeous. They also come with Catwa appliers, for those of you wearing Catwa eyes. 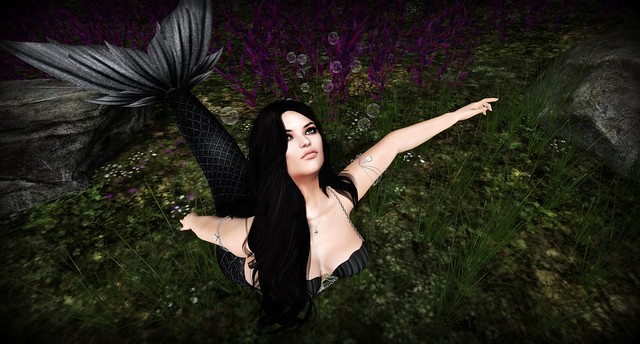 2 thoughts on “Lady of the lake”