Rose gold is hot right now. I didn’t set out to do a post with a rose gold theme, but suddenly I realized I’d put together a look that was pretty rosey and a bit gold, so I went with it! I am wearing a new Mainstore release from Just Because. This jumpsuit was inspired by the recent Fleur gown release. Like the gown, there’s a sheer lace top version (which I’m wearing) and an opaque one. I love that gown, but I really love the jumpsuit! Especially since it lets me show off the cute Lykke heels Ingenue released for The Arcade. 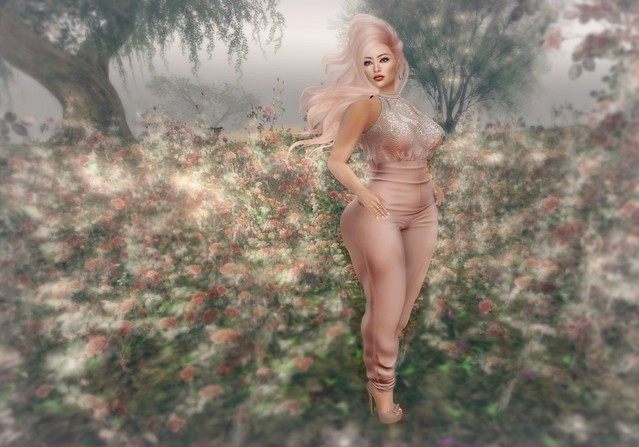 I am also wearing a new Mainstore release from Exile (I am sooo loving all the Mainstore releases lately!). Exile now has hair that is bento animated, and Over The Edge is one of them! It’s pretty cool, and especially if you’ve missed the movement of flexi hair you should check it out. There is also a static version included, but I have the animated version on, and was trying to capture the hair as it moved the furthest from my body so the static version may seem slightly different. My lipstick is a release from [TheSkinnery] that is available at The Chapter Four event. My eyes are yet another color of the Don’t Speak pack, also from [TheSkinnery], and currently at Rewind for another 24 hours or so. After that, look for them at the Mainstore. My Catwa head applier (Cristy) is also from [TheSkinnery]. The poses I used for both pics are both by Luxe and are available at the current round of Uber. These poses include curvy versions, for which I am very grateful. It’s often a challenge to find poses that work with my curvier shape, so whenever I see a store that does curvy versions I make a note of it! 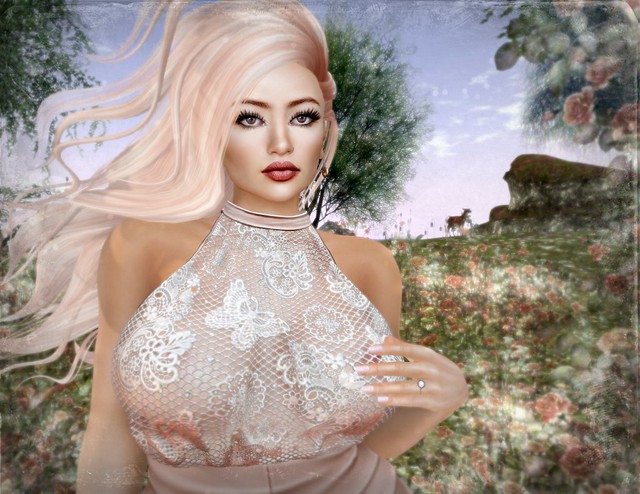