With all the hype in the RL beauty world about “festival looks” I couldn’t resist doing on for SL. Also, it was the 20th anniversary of Lilith Fair, which I went to in 1997. My SL festival look is far more modern although there are some things that never go out of style (at least in my book), like strappy, flat sandals and long, flowing skirts. My skirt and top are both from Decoy and you can grab them at Collabor88. My sandals are by fri.day. They were at Summerfest, which has ended but should be in the Mainstore soon. My hair is Exile. 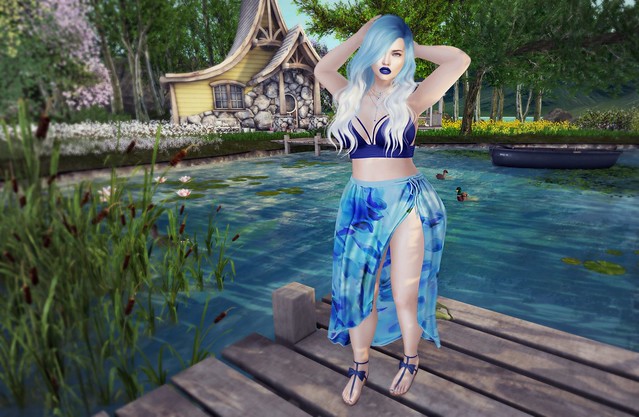 I went to Lilith Fair with my then boyfriend, who wasn’t particularly memorable (or well, okay he was very memorable, but not for good reasons) but he did buy me tickets when I said I wanted them, so I have to give him credit for that. It was awesome. It was in Camden, NJ (which is not awesome, trust me) and we had seats on the lawn… which meant sitting on blankets. I won’t talk about the ways in which said guy embarrassed me that day (or others), but rather will focus on the epic entertainment spectacle I got to be a part of on that steamy Sunday afternoon/night.

We got rained on for awhile, but no one cared because we were having too much fun. Tracy Chapman was one of the performers that night, and although I sort of liked her, I was probably least looking forward to her performance… and she stole the damn show. No one was sitting during her set. She was unreal. Fiona Apple opened the mainstage and she was so newly popular at the time, and one of my favorites (Tidal is still an all time favorite of mine) and she was so natural and funny and I remember being in awe of her ease. She was about to officially open the show (there had been side stages all afternoon, one of which included Susanna Hoffs and how do you not LOVE hearing Eternal Flame performed live?) with all these major stars and she was just a teenager and it was pretty awesome.

So, in honor of this I decided to be bold and do some crazy lips… these dark blue lips are from [TheSkinnery], and are a group gift that work great with the new Alix skin released for LeLutka at Shiny Shabby. [TheSkinnery] recently updated their body appliers and the new ones are gorgeous (in the mainstore)… plus they’ve added three new skin tones. Here I am wearing the peach tone. I was also wearing one of the new tones in my last post. 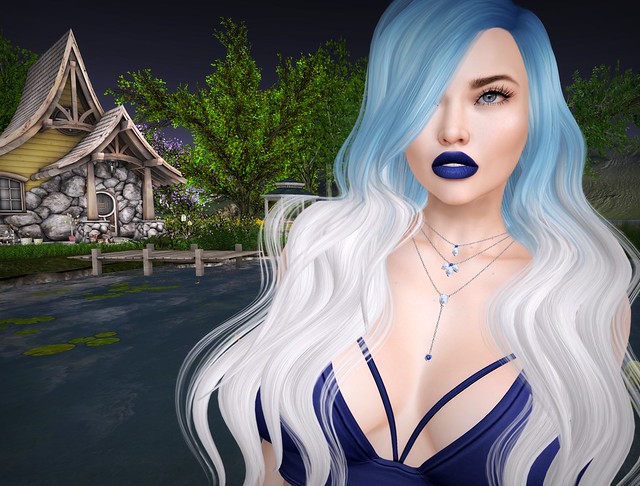