The second I saw this adorable prop that oOo Studio released for The Seasons Story I knew I had to grab it. It’s a little vignette and it’s so cute. I decided to watch some cute little birds out the window while wearing my owl print Cupcake leggings from Blueberry. These leggings have the most amazing butt… seriously. This pic even got invited to a group on Flickr called Super butts of SL, and I was so proud. I feel like my butt needs a cape now. Anyway, back to the leggings… I fatpacked them (or really a friend sent them to me as a gift, to be accurate about it) and Blueberry recently added an upgrade to the fatpack that included something like 50 additional prints. It’s INSANE and totally well worth the investment if you’re big on leggings! I paired the leggings with boots from Just Because and a cute cropped sweater from Neve. I felt like I need a bird watching pal, so I rezzed a little kitten from JIAN. 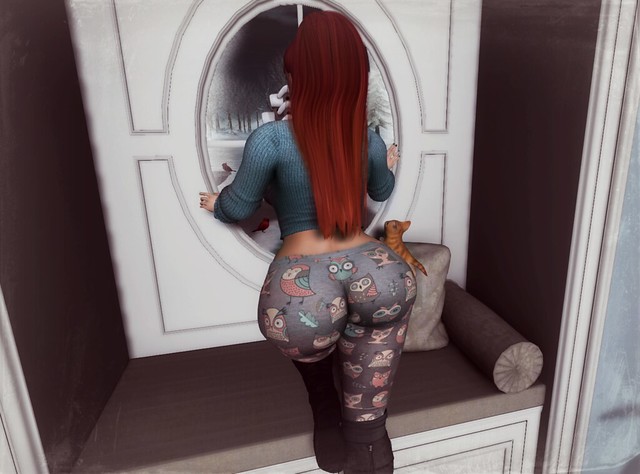 My hair is Ari from Truth, and this comes with a version without bangs but I’ve always loved straight, blunt bangs so they were a must for me! I did this second picture on January 20th, after seeing Hextraordinary’s adorable Courting Candle release for Fifty Linden Fridays. I thought if ever there was a day that we needed a little extra light in the world, it was the day Trump was inaugurated. My skin is a new release from Pink Fuel, Sabine. It has a bento version for the Catya head from Catwa, but I don’t have that head so I’m wearing the non-bento version on Dyana. I think it’s adorable, and as always it comes with so many options. Mochi really gives you so much for your money with her appliers/skins! My eyes are new from Buzzeri, and can be found at The Epiphany. I’m wearing the rare Storm shade, but all of them are lovely. I am also using the Vista bento hands in these pics. 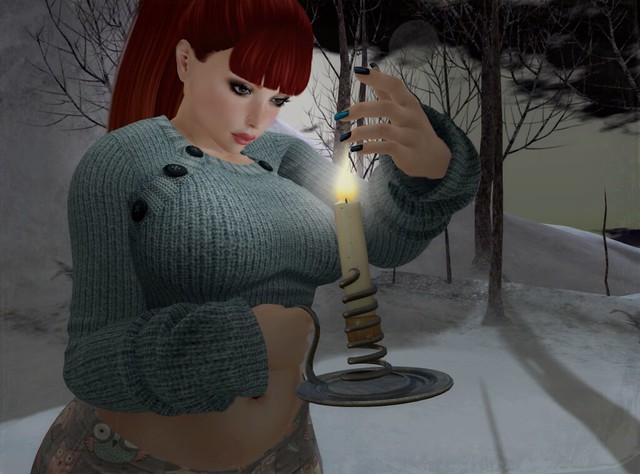 For those who have been celebrating, happy Orthodox Christmas/Epiphany to you. This is a special day for me because it’s the anniversary of the first time I ever spoke to my husband, 18 years ago. We made our first date plans over the phone and spent a couple of hours getting to know each other. I always think of it as the day of our personal epiphanies.

I’ve got 3 pics for you today, and the final pic is slightly NSFW. I began the new year with a stomach bug that had me mostly in bed for several days now but I’m finally feeling more myself. I hope your start to 2017 was more cheerful!

First, if you haven’t already seen it, LeLutka has released the updated, Bento compatible version of their popular Simone head. If you already own the original Simone head, wear it when you buy the new one and you will be refunded 50% (the original purchase price of $L2500), which is just awesome! I think this is a stunning head, which was very easy to customize. This new option is great for those who’ve craved a mesh head but wanted to keep their own face, and multiple stores, including Catwa have released bento heads. I already owned Simone, and the updated version was a gift from a dear friend. The new LeLutka HUD is really sleek and easy to use. Definitely check it out. As always, it includes a base skin from Glam Affair, but GA also released several brand new appliers for it which can be found right at LeLutka, in the Undivided section where you’ll find all of their mesh heads. Please note this is the ONLY pre-existing head that is being updated to be Bento compatible. I am wearing Simone with the new Lucrezia applier, which is available at Uber. The eye makeup I have on is from the Simone hud, however. My necklace and earrings by Cae are the exclusive Gifts of the Guardians that you can get from the Gos & Cae collaboration at Gacha Guardians. 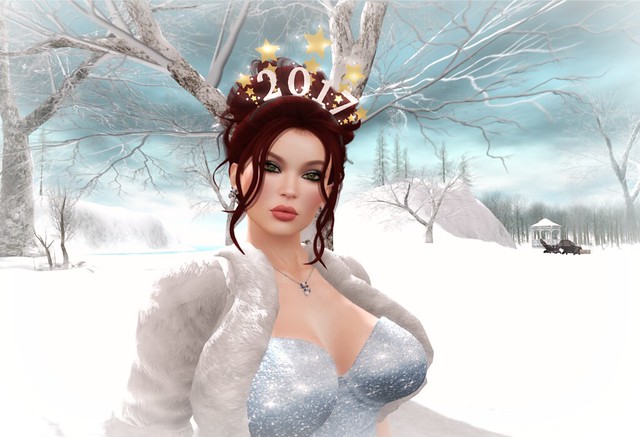 In both pics I am wearing the Christina gown released at the Just Because mainstore right around the holidays. This gown is absolutely stunning and I could not choose a single color, so I had to change it for the headshot. This can be worn without the fur jacket, which makes it extremely versatile, and while it was the perfect dress for the holiday season, it certainly works year round, with or without the jacket! My malt is wearing a suit from Deadwool. This particular pattern was a limited edition, but it’s available in other colors and it’s really so well done. 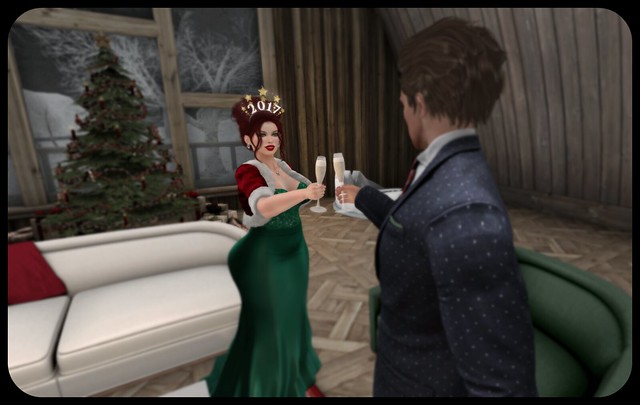 Finally, I knew I wanted to do this last picture the second I saw this clever collaboration between SLC and Sallie at October’s round of The Epiphany. I thought, a tied up, sexy Christmas gift type pic would be hot. This one’s below the cut since it’s sorta NSFW.