I didn’t dive too deeply into my inventory for my newest round of Raid Your Closet, but these are things that met the criteria! Most of these things I’ve had just a few months. But hey, newer things need love, too, right? Like I this beautiful, freckle-faced DeeTaleZ skin I bought earlier this year, and never once wore. I love freckles on other people, like my beautiful sister Peppersley. I just don’t usually like them on me. But this time, I did. 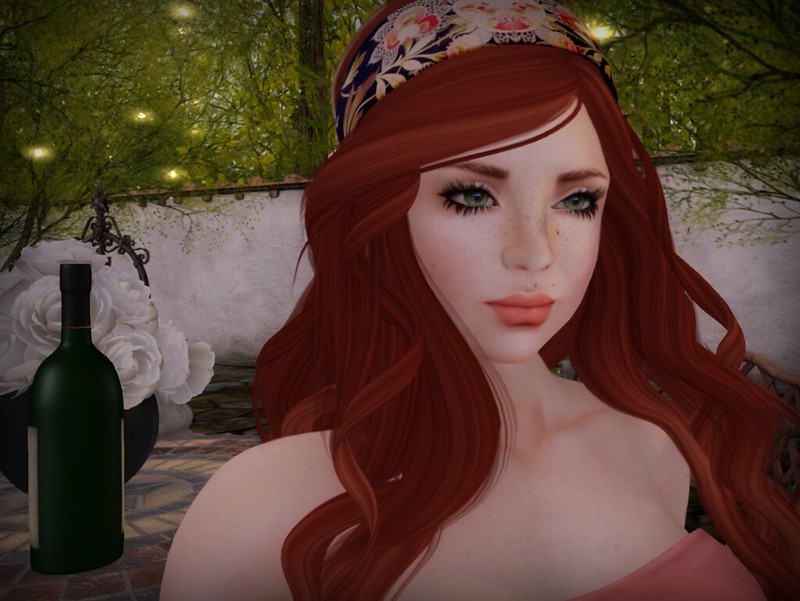 My dress is a fairly recent release from coldLogic’s spring line. This may sound weird, but I love the creases. The attention to detail is just one of the things I always love from the coldLogic designers. Also, it’s worth noting I am wearing this dress, in the standard sizing large, with my Maitreya Lara body without any issues. Just had to alpha out a few parts, and voila! My strappy, sexy sandals are from Livalle, and this beautifully bohemian hair is from Tableau Vivant. 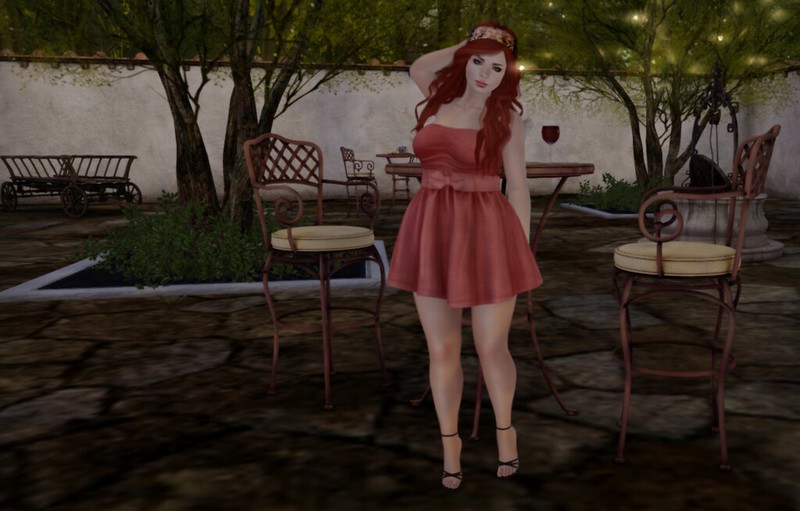 So, here’s a secret. I love boho style. Okay, maybe that’s not much of a secret, but it’s still true. So when I heard the latest round of Uber had a bohemian theme, I knew I was in glorious trouble… the sort that gets you grounded as a teenager but it is so worth it you don’t even care. That sort of trouble. Add in some things from the wonderful new Shiny Shabby event and I was a double goner.

First, a bit of decor. I love rugs. I think there tends to be a major shortage of well done rugs in SL. So when I saw the rugs Junk had done for Uber, I was elated and knew they must be mine. The flipped up edge of this rug made me think of the adorable puppy and kitten playing that Ispachi did for December’s Arcade. It seems like this is a rug that had been frolicked on! The pile of books is Zerkalo, from their gacha at Shiny Shabby, and the rose in the vase on top of that is from the floorplan/Consignment collaboration that is (appropriately) part of Collabor88 this round. The gorgeous drapes are also at Collab, from Half-Deer. And I have to say, I rarely buy curtains/drapes in SL. I’ve seen other people make them work in amazing ways, but I always feel like I fail. These were so beautiful I couldn’t resist, and I thought they dressed up the brick wall of my llorisen skybox nicely! 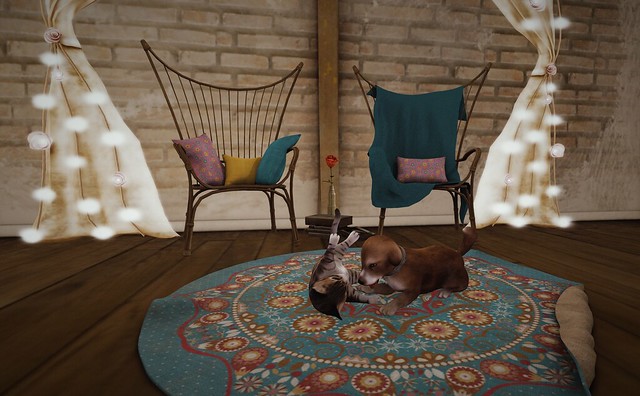 In the next pic you get a mix of fashion and decor… this insanely gorgeous skin, with its luscious pout is Alice from Glam Affair. Alice is available at both Kustom 9 and Shiny Shabby right now, but this particular makeup is from the Shiny Shabby edition. My hair is also from Shiny Shabby. It’s by Tableau Vivant and it’s the debut of a new “frizzy” texture hud. Which, btw, I love. Maybe it’s because I have naturally curly hair in RL… though my frizz never manages to look quite this, well… cool? The outfit is Foxes for Uber… the tops and skirts are sold separately and come in lots of colors. I’m not usually into gold, but this I liked enough to overlook the gold (and on the peach it’s kind of a rose gold more than a gold gold which helps). The posters and couch bed thingy (that’s a technical term) are both from tarte at the current Uber… the stars are from tarte from the last Uber. The scroll with the arrow is another of floorplan’s February Collabor88 offerings. 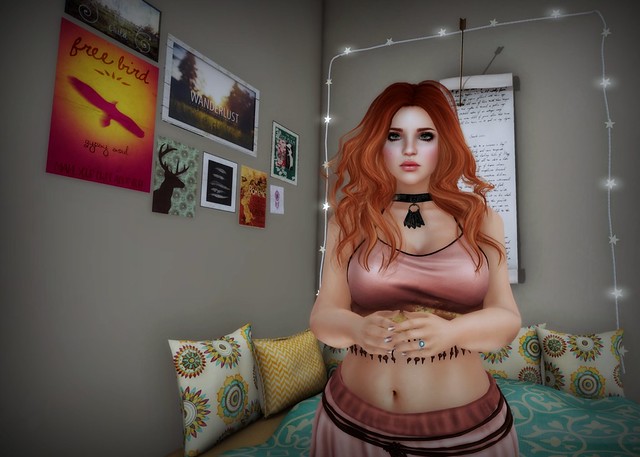 On a personal note, I’m finally off that wretched medication that was making me have near-daily migraines, and I’m feeling a lot better. So expect more from me in March than you got in February!

In both pics
llorisen: ciaran skybox