So, there’s a new club opening Sunday called Altitude. Actually, it’s more of a destination venue than a club. It’s designed for live music performances, which is really cool and something I used to enjoy a lot of in SL (before I became a platform dweller 😛 ) In honor of the grand opening, Valentina E. Couture has made this sexy outfit as a launch gift! This outfit will only be available during the big debut event, from 12 pm to 5 pm SLT Sunday, September 13th! So don’t miss out… take the opportunity to go check out a new venue AND snag an awesome gift at the same time. Oh, and my adorable shoes are from fri.day, for the new Collabor88. This month’s witchy theme has been super popular, and it may still take a few tries to get in, but oh my, it is worth the effort once you do. 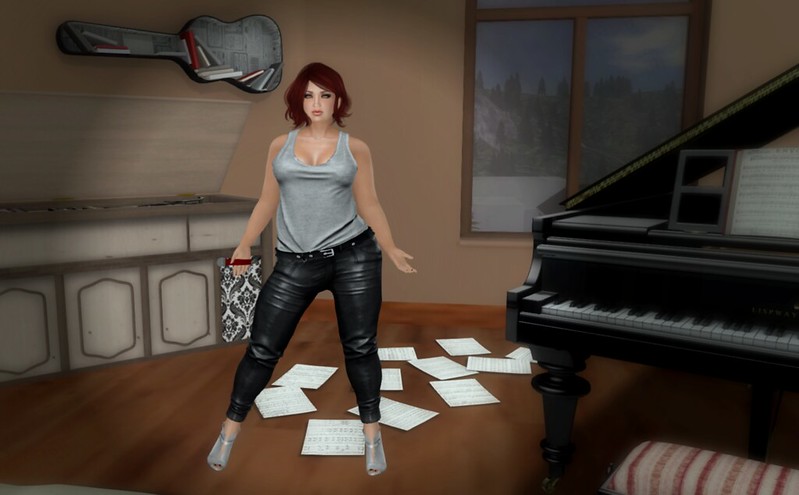 Now, please bear with me while I get personal. And wordy.

You are imperfect, permanently and inevitably flawed. And you are beautiful. ~Amy Bloom

I love that quote. I think we live in a world that encourages this quest for flawlessness and perfection, and no matter how perfectly that foundation covers your “flaws,” they still exist. Not to mention, the most beautiful parts of ourselves aren’t the parts that show on the outside. Who we are as individuals isn’t contingent upon our skin being perfect, a number on the scale, the size of our pants or any other external thing. It’s about our personalities, and this is where true beauty lies. And even then, we’re still not perfect. No one is… and the quest for it just tends to leave us feeling inferior, self-conscious, empty and frustrated.

In Second Life, it’s possible to be physically “perfect,” whatever “perfection” might look like to us personally. And actually, it’s hard to NOT be perfect in some respects. Most skins are flawless, gorgeous works of art. And not that I don’t appreciate that, because I do. I appreciate beauty, in all of its forms. But sometimes I find myself wanting SL to be a little… more realistic. A little less perfect. Last year, I went from being a (smallish) medium in standard sizing to a very lush large. It was a big change. Most of you will have noticed that the size difference from medium to large is quite a jump. Much more pronounced than the difference from small to medium. When mesh first came out I was between a small and medium and I went smaller. The idea of making my avatar larger was so… distressing. And I didn’t want to admit that to myself, let alone to anyone else. But it’s true.

I’ve struggled with a RL eating disorder and body acceptance pretty much my entire life. I was a fat kid, a fat teen and I’m a fat adult. And I say “fat” merely as a descriptor, but oh it’s such a loaded word. It shouldn’t be, anymore than saying “I’m tall” or “I have brown eyes.” But our culture abhors fat, and strives to do everything to eradicate it where possible. I decided I wanted my SL shape to be fuller figured. I still wouldn’t call my av “fat,” but comparatively speaking she is… particularly in the blogging/fashion world of SL, where it seems most people tend to be thinner. In reality, even though to me, a (real life) person of a comparable size isn’t “fat,” I suspect that if you went by the (useless) BMI charts the woman in question would be considered “overweight,” if not “obese.” But size is relative, in some respects, and what is “thin” or “fat” varies depending on perspective, too. I have never and will never be that person who goes into any store and easily finds clothes that fit, perfectly, without trouble. Though it may seem strange I’d want to relive that experience in Second Life, I have worked very hard on eating disorder recovery and body acceptance in real life, and it occurred to me last year that my avatar being so close to a societally idealized shape was not a healthy thing for me. It should be noted that Lucie’s build is really nothing like my RL one, but it still feels more true to myself. It was a matter of finding the balance between fantasy and reality that wouldn’t messing with my head… but I still often wished for a fuller face.

Enter Mallory Cowen, the talented creator behind LAQ, who has recently introduced skins that are exactly what I’ve been craving in my SL. Particularly Elise, which I’m wearing below. Elise comes with a “built in” double chin. There’s a tattoo layer for a “simple” chin, too, for those who love the skin but don’t want a double chin. Her features are fuller and I just love this skin so much. You can also buy the double chin tattoo separately for use with other LAQ skins (and you may be able to match them to other brands, but I’d demo first, to be sure). My cute fortune cookie necklace is a new release from Cae for The Mix, and which you can grab at the Mainstore. 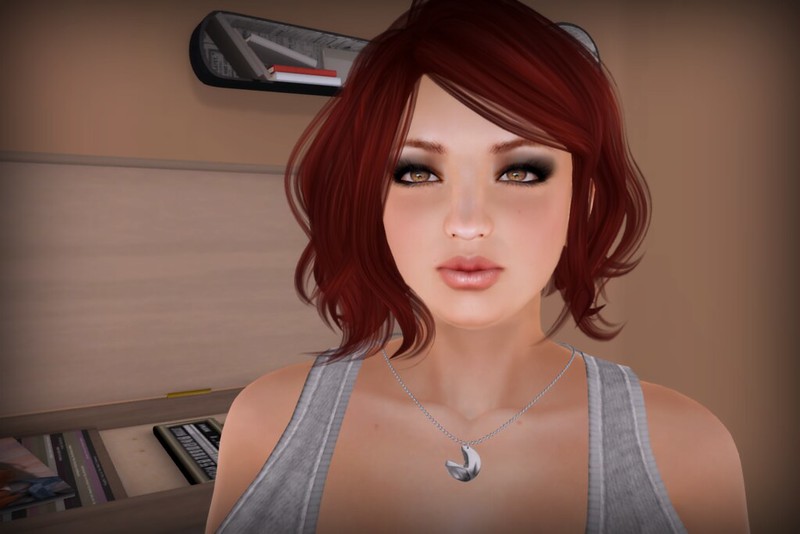 It struck me as I photographed this skin, trying to find a light that didn’t minimize the double chin, how… counter-intuitive that is, how even now, with all the work I’ve done to accept myself as I am today, I’d probably cringe if lighting made my double chin seem even more pronounced. I would immediately recognize what I was doing, and shut down the negative self-talk. But it would probably still happen, particularly on a bad day. But that’s what I mean… no one is perfect. We all have our problems and flaws, and trying to deny that or trying to “erase” them, well… for me, at least, that’s like trying to erase a part of who I really am. And that’s just not something I am willing to do anymore.

I applaud Mallory for her work. It’s something I think SL really needed, and it’s going to be great for RPers (she did several more mature skins, too). Check out the LAQ blog for more pics, and I plan to blog some of her other newer skins, too! I look forward to seeing what she does next.