The second I saw this Halo leg brace that Hate This released for Memento Mori I had the idea of a post that involved a skiing injury. Maybe it’s because Crested Butte got so much snow recently, so skiing’s been a hot topic (hotter than usual) here in CO. Regardless, that was the concept. But I felt I needed something more, so I took to Marketplace where, lo and behold, I found this neck brace, which is coincidentally also done by Hate This! The crutches are also Hate This, and also a MP find. They are older and non-mesh but only L$25 so they were perfect for this post! Plus, like the leg brace and neck brace, they were color change, which meant I could make parts purple!

My skin applier is also at Memento Mori, and it’s from Glam Affair (another post with a close up of this skin is coming soon). My hair is a Truth VIP group gift called Gaea, and I like it quite a bit. I like short, cropped hairstyles and often feel there aren’t enough of them in SL! If you’re not in the Truth VIP group, it’s definitely well worth the one-time fee of $350 to join. This month’s gift included two different hairstyles! Check out Truth’s Flickr to keep up-to-date.

The One Cranky Bitch cocoa mug on my side table by brocante is one of the items in Reign’s Cozy V2 gacha for the current round of The Epiphany (if you click through to Flickr you can see the pic bigger). And really, can you blame me for feeling like a cranky bitch?! I shattered my poor leg and hurt my neck! Never going skiing again! 😉 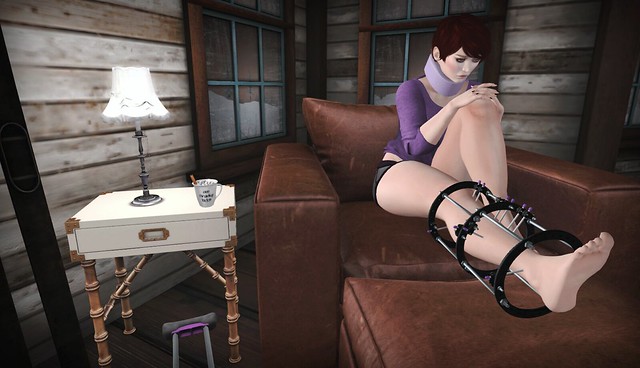