Summer Sisters by Judy Blume has long been my favorite (stand alone, anyway) book. I bought it as a new release, in hardcover, back in 1998. It was quite the luxury purchase, even though as an immediate best seller, Barnes & Noble had it discounted pretty heavily. It was the first hardcover book I ever bought new, not counting textbooks.

I have read it every summer since. Sometimes I read it more than once in a year. I have passages of it memorized. I think of it randomly, and sometimes quote it before even realizing where the quote is from. Suffice it to say, I love this book.

I’ve wanted to do this scene, one of the most powerful in the book, for as long as I can remember. My first alt in SL was named Vix (the nickname of the character I am portraying here). And finally, after I finished reading it this summer, I decided it was time to just get it done! 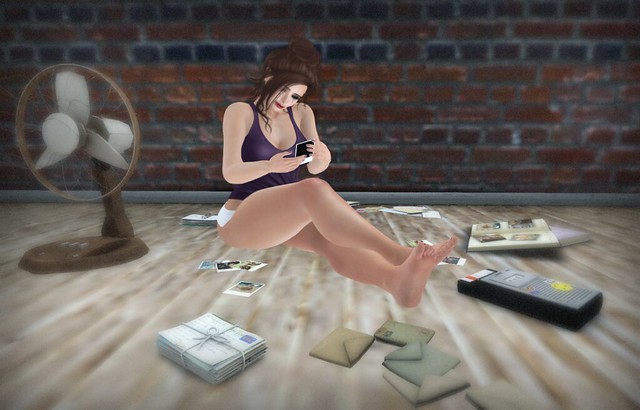 Also, if you haven’t read the book, this is something you find out in the prologue, though the actual scene portrayed above happens later in the book. So it’s not a spoiler, and you can still pick the book up and read it. And I highly recommend it, but I’m obviously biased.

You may have noticed a lack of blogging here lately. A lot has been happening in RL, but the main challenge I’ve had is issues with our ISP CenturyLink. We’re having exactly the kinds of problems SL most hates… latency and packet loss. Blah. It means I spend a lot of time in SL with things constantly rebaking, and that makes picture taking a challenge. They’re working on it. It’s somewhat better. But that’s why things have been quiet here of late. Hoping that changes, and soon!

There are so many events happening right now… some of our regular faves, like Collabor88. And then there’s Fashion For Life, which is a massive, amazing event that raises money for the American Cancer Society. I’ve written before about why fundraisers like FFL and RFL are meaningful for me, so I won’t go into that again. But suffice it to say, I think the good these events do is amazing and impressive. And I love the theme of Wanderlust for this year. You can read more about the event here, and there is a complete list of slurls on this page, too. There are a lot of sims for this event, which means lots of opportunities to shop and help raise money for a great cause!

I’m wearing the new Summer II from Glam Affair, which can be found at the new round of Collabor88. I fell hard for Glam Affair’s Summer last year, so I was happy to see another take on this beautiful skin. My adorable sun dress is from SySy’s for Fashion For Life, as is the playful suitcase pose/prop by NanTra. These strappy sandals are SLink add ons from fri.day, also at Collabor88. My bracelet by Theosophy, the chairs on my deck, and the bookcase you can see a glimpse of inside are also all items from Collab. The chairs are by Trompe Loeil, the bookcase is from Schadenfreude. 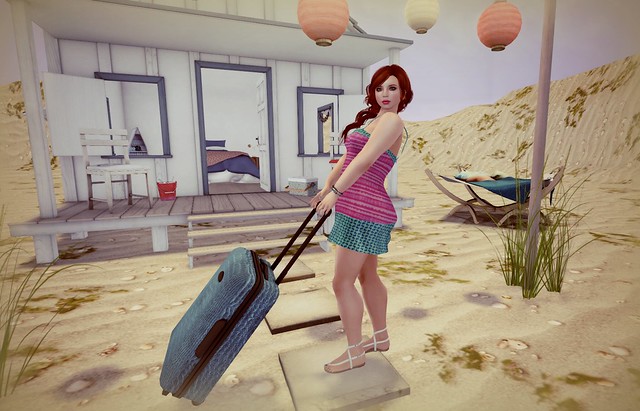 Here’s a close up, to show you both the gorgeous Glam Affair skin and also the Cae jewels for Serafilms Gone With The Wind round, which opens today (June 12th)! I’m also debuting my new shape here. I’ve been tweaking my face for a few days, and I like the end result. I’m sure most people won’t see a huge difference, but to me it’s a fairly dramatic change, lol. 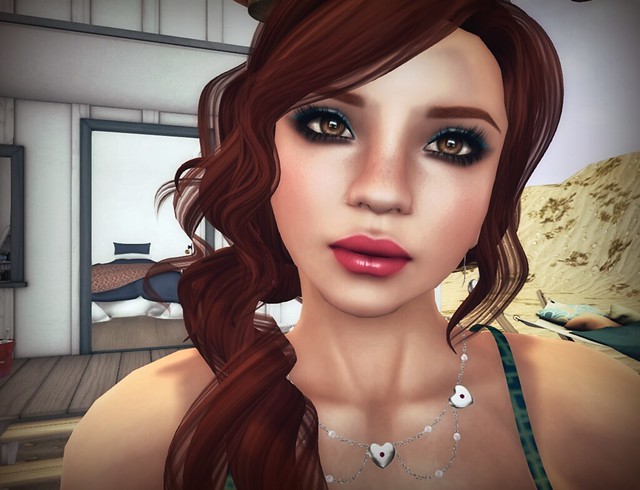 More soon… I’m getting back into the swing of things after traveling and dealing with a flare up.